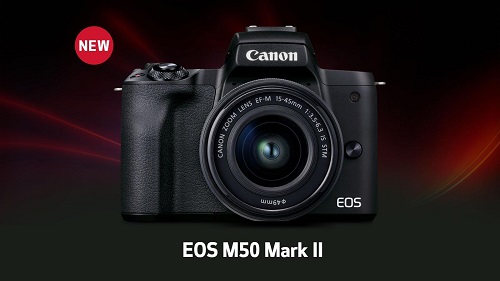 Japanese giant Canon on Wednesday announced the EOS M50 Mark II mirrorless camera, designed for photography enthusiasts who are also keen to do videos and live stream for Rs 58,995 in India.

The EOS M50 Mark II features an enhanced Eye Detection AF, which is able to detect and focus on a subject's eye even when the person is far away. This will ensure the eye will always stay in focus, making it possible to use Eye Detection AF for full body shots in addition to the common upper body portrait shot.

With a shooting speed of up to 7.4fps with servo AF the camera aims to capture multiple shots of moving subjects such as children or pets. Its built-in high-resolution electronic viewfinder (EVF) makes for easy viewing even when shooting in the bright outdoors.

Servo AF is an auto focus function that allows a photographer to keep a moving object automatically focused based on the camera's setting.

The EOS M50 Mark II makes full use of its touch-sensitive display with the new Tap AF feature where users can instantly switch focus from one person to another by just tapping on the screen, which is especially useful in group shots.

The camera supports movie digital zoom (approx. 3-10x) at the central part of the screen during shooting, which can be combined with optical zoom on a zoom lens to achieve magnified shooting with up-close shots.

It also supports the Canon's new image.canon cloud platform and registered users of the platform can upload, store, download and transfer images smoothly between various devices.

The EOS M50 Mark II sales will start from December, the company said.