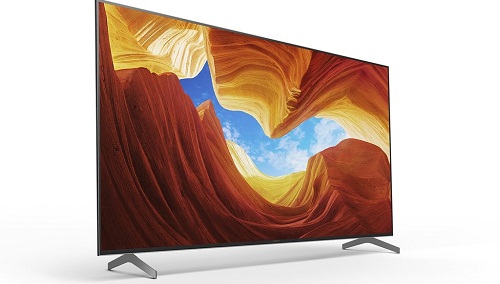 We used the 55-inch model for around a week and here is what we think about the new Sony product.

In terms of design, the television scores decent marks thanks to its simple yet elegant looks.

The TV comes with table stands included in the box, which are well designed and are attached near the corners and are wide as well.

Coming to the bezel, the TV has slim bezels that do not interfere with the viewing experience. The screen has silver borders all around it, giving it a premium finish.

The television has a VA panel and high peak brightness with both SDR and HDR content, along with full-array micro-dimming.

The ‘TRILUMINOS' display powered by 4K HDR Picture Processor X1 reproduces more colours than a conventional television -- analyzing and processing data in every image to make colours even more natural and precise so pictures are closer to real life.

The 55-inch Ultra-HD (3840x2160-pixel) LED screen features full-array local dimming, with support for HDR up to the Dolby Vision format.

The maximum refresh rate is 120Hz at full-HD resolution and 60Hz at Ultra-HD.

During the review, we used it as our primary television to just watch Indian Premier League (IPL) and it was an overall good experience, with valuable feedback from family members and friends.

Apart from IPL, we also streamed Akshay Kumar's movie Laxmii along with Mirzapur 2 season 2. The overall display and the sound quality was awesome.

The X9000H provides an extremely smooth gaming experience and displays gameplay images of up to 4K resolution at 120 fps with a very low input lag of 7.2ms.

The ‘Ready for PlayStation 5' TV models also boast BRAVIA Game Mode, which will allow users to automatically play games on the PS5 console with low latency.

The TVs run on Android TV OS with support for a lot of apps and access to Google Play Services and Google Play Store.

You also get Google Assistant support. Additionally, it is also compatible with Apple AirPlay and HomeKit. There is also Chromecast built-in.

The overall Android TV performance is responsive and switching between apps, adjusting settings is quick.

The TV also comes with Netflix Calibrated mode, which automatically adjusts the TV's picture settings to recommended levels when watching certain titles on Netflix, based on the content creator's inputs.

The TV comes with X Balanced Speaker technology which is a mix of round and oval speakers that bring in the ability to zoom voice and put the Dolby Atmos technology at play.

The TV has good sound output and you don't need an extra speaker if you love loud sound.

The remote features both IR and Bluetooth, and runs on two AAA batteries. Unlike the LG TV UI, Sony's TV remote still doesn't have a mouse feature and typing is still manually.

There are dedicated controls for playback and Android TV navigation, plus a microphone and button for Google Assistant, proper volume and mute keys, and hotkeys for Netflix and Google Play, among others.

Conclusion: The Sony X9000H is a great choice for a price tag of Rs 1,09,000. It delivers superb picture quality thanks to its great contrast ratio, high peak brightness and wide colour gamut.

With this TV, your OTT experience will hit a new level.